Jason Strategy Guide Section is Up!

As promised, the Jason strategy guide section for Friday The 13th: The Game has launched!  The guides will be updated throughout the life cycle of the game and will be expanded upon as necessary.

Let me know what you think in the comments and if I need to add anything I will do so. 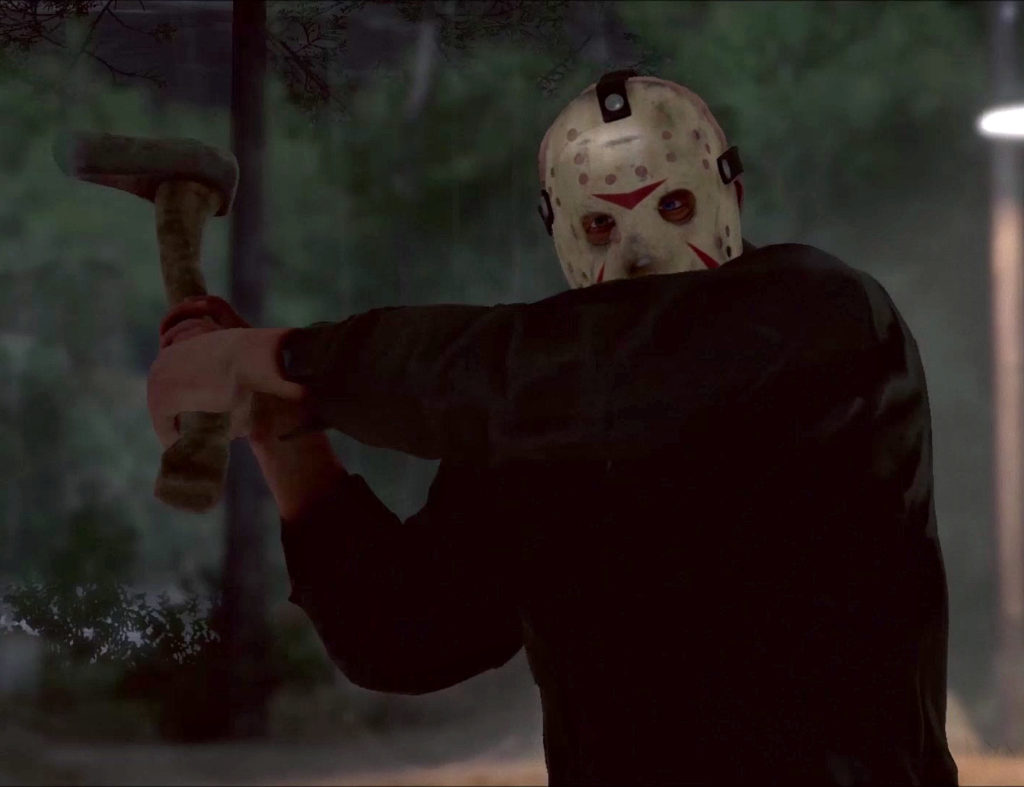 Jason Voorhees has returned to Camp Crystal lake seeking to avenge his mother.  Supposedly people have seen Jason and claim that he wears a sack or a hockey mask.  The only man who saw Jason and lived to tell the tale was a young man named Tommy Jarvis, and he ended up in the asylum…  One thing is for certain, Jason is still out there and whether you escape or end up as one of Jason’s victims is up to you.  Let’s slay!

The 5 main abilities for Jason

Note:  Jason will begin one ability and slowly gain more abilities as the match goes on.

Morph:  The Jason-player can choose a spot on his map and teleport to that location.  Depending on the type of Jason, morph may have a shorter or longer cooldown.  This is great for traveling long distances or if you need to cut off a counselor while your shift ability is still recharging.  Have you ever wondered why Jason was somehow able to appear everywhere at once?  This is the reason why.

Shift:  While Jason may seem slow at times, he has the ability to phase-out and reappear in a nearby location.  When shift is activated players will despawn and gain supernatural speed.  As they travel, the camera will take a first-person view and then return to third-person once the ability is deactivated and Jason reappears.  Shift is useful to close short distances and works well with sense if you’re hunting a particular counselor.

Stalk:  Stalk allows the Jason player to be sneaky and perform some stealth kills in the second half of the game.  When stalk is activated, the Jason player’s presence will no longer trigger the dramatic Jason music to alert counselors he is nearby.  Instead, the Jason music will be silent and will remain so until a counselor sees Jason.  Any counselor who sees Jason will be able to hear the music, while those who do not, will be unaware of his presence.  Stalk can be used for up to 3-minutes when standing still and less than 20 seconds if the Jason player is combining it with Shift.  While the Jason-player is not invisible, stalk provides Jason-players an advantage in setting up ambushes, sneaking up on counselors, and performing jump scares if they time the abilities just right.

Rage:  At around 12 minutes into the game, Jason gains his ultimate ability, rage.  Although rage is a passive ability, it is extremely deadly.  Once a Jason-player has rage, they smash their way instantly through doors and walls, and all of their abilities will recharge much faster.

Throwing Knives:  Jason-players can use throwing knives to injure counselors who are running away.  There are 20 knives scattered across the map that Jason can reach while other counselors cannot.  Once a knife has been thrown, it is gone.  Knives will not kill counselors unless they are extremely weak and on the verge of death.

Traps:  In order to survive in the wilderness during his teenage years, Jason taught himself how to use traps to catch food.  Jason-players can put Jason’s survival tactics to good use by strategically placing traps across the map.  These traps do more slightly more damage to counselors than the average bear trap.  Jason-players can see on their maps where a trap was placed and be able to tell if it was sprung through an audio cue. 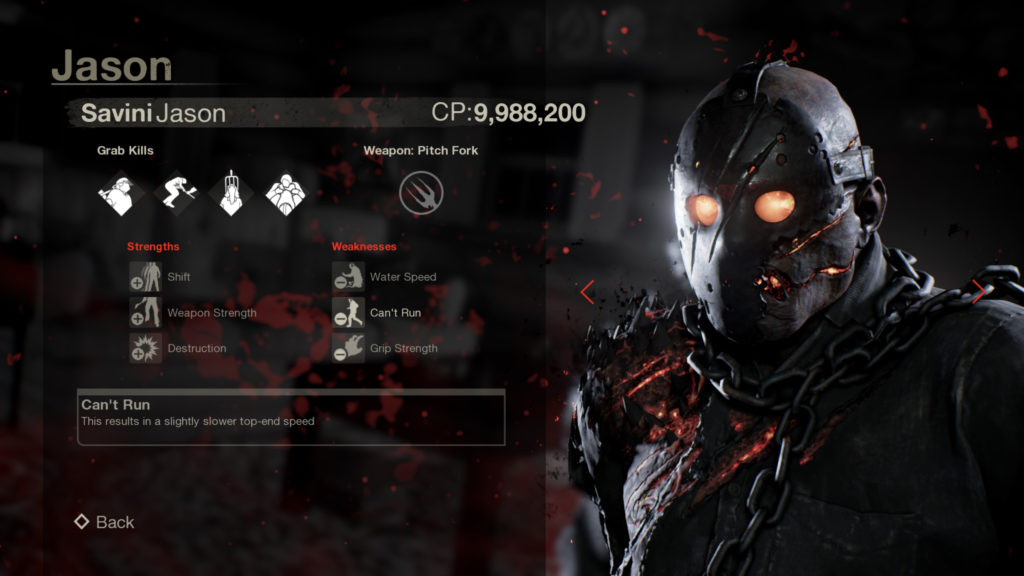 Not even the F.B.I. could kill Jason and keep him from this world.  Part 9 Jason, a.k.a. Hell Jason, is for those who like to be on the move constantly with an improved shift ability and taking the fight to counselors.  If you wanted to perform some good kills and not be afraid to take on more than one counselor in the beginning, this Jason is for you.  Your true talents won’t shine until the second half of the game, but you will have fun changing from an aggressive killer to a sneaky killer once you gain stalk.

With an increased stun resistance, you’re less likely to get knocked down, giving you time to perform slashes and kills.  Be aggressive in the beginning.

Due to your low hit points, shift and fake out players using flares and rifles.  Be wary of weapons that can do a lot of damage such as shotguns and axes.

Don’t pursue groups of 3 or more counselors.  Try to end the game quickly before players can get together and make a plan to escape.

Stack shift and stalk to perform memorable ambushes in the second half of the game.

Place your two traps strategically near important locations or places you feel counselors will run by.

Tips for fighting Jason and how to survive:

A boat escape or escaping by land within the first 10 minutes is recommended.  Due to Hell Jason’s ability to get a reduced cooldown on shift and stalk, even the most agile of counselors will have a hard time escaping in the latter half of the game.  A boat escape is your best bet since this Jason isn’t a fast swimmer.  Although this Jason has fewer hit points, he is less likely to get stunned, so attempting to fight Jason in open combat is not a wise decision unless you have faith in your fellow teammates to back you up.  Even then, it might not be enough to send Jason back to hell a second time.

Even Jason Voorhees loves the ‘Big Apple’.  This Jason is for those who want to specialize in memorable ambush kills towards the end game using stalk.  This Jason also specializes in flushing out players hiding in cabins throughout a match.  Although you might not be very fast on the land, your destruction ability to break through doors and your fast movement in the water will make for some unpredictable game play.

. Make sure players aren’t trying to escape using the car or police, so guard those positions when you can.

. Due to your weak grip strength, I recommend injuring the counselors with your weapon first and then grabbing them.

. Charge through cabin doors to flush out counselors who are trying to hide and raise their fear level.  You have an easier time breaking down doors and walls, so use it to your advantage.

. Build-up a counselor’s fear so you’ll have an easier time finding them if they escape you.  You can only use sense for a limited time, so use it wisely.

Counselors, your primary goal is to escape within 10 minutes.  Use this Jason’s weak sense ability to stay out of sight in the beginning and repair the vehicles quickly.  While a boat escape might not be ideal, do your best to escape within 10 minutes. Due to this Jason’s increased stalk ability, you will be at risk of losing track of him and be more susceptible to ambushes or getting picked off. If this is a skilled Jason-player who can combine shift and stalk…all I can say is you’re all doomed.  Staying in cabins for long periods of time is not recommended since this Jason can destroy barricades quickly.  Stay on the move and stay inland. 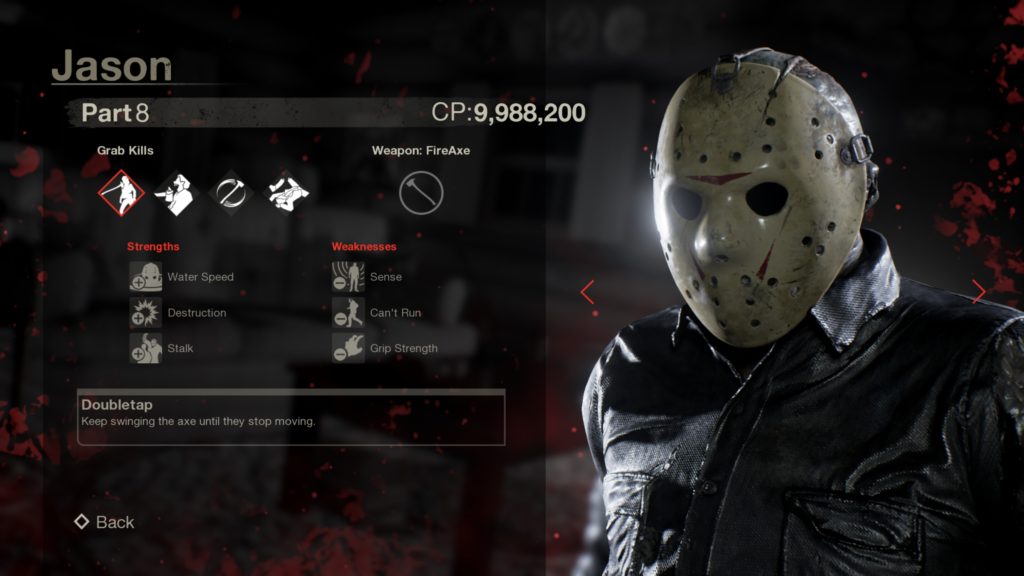