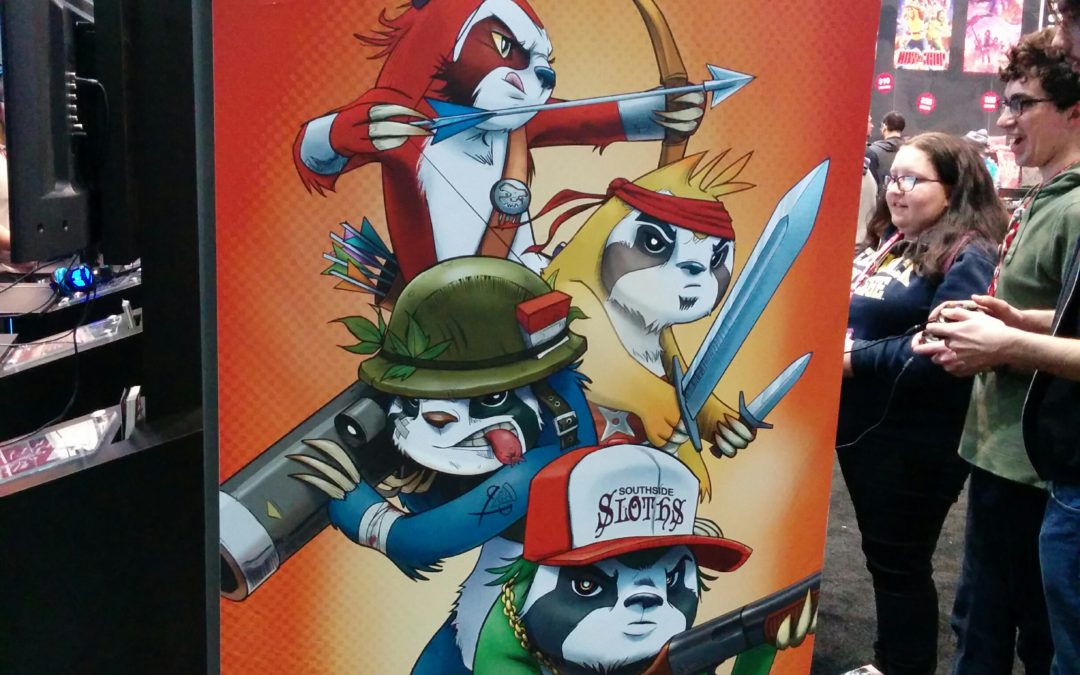 My Experience At PAX East

Hello fellow gamer!  Adam here.  I thought I’d kick my first post off with PAX East.  During PAX I was jet lagged from leaving Japan and returning home, but I was hyped.  I hadn’t been this excited since I attended the Tokyo Game Show last fall, where I caught a 5:00 am train to be one of the first in line at 7:00 am.  After attending the Tokyo Game Show twice, I learned that every show requires a different style of preparation. Since I live in the heart of Boston, I thought I’d leave my apartment at 7:00 am and make it to the doors by 8:00 when security allows people inside.  Boy was I wrong!

When I arrived at the convention center, I was greeted by a long line of people snaking two blocks.  After enduring what seemed like a never-ending 90 minutes outside in the cold snow, I finally made it to the first panel of the day, “How to PAX.” 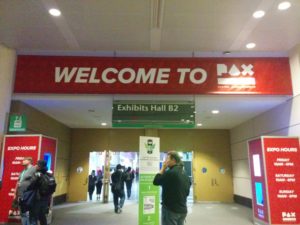 The panel was as I expected: an introduction on how to make the most out of PAX, but the last 15 minutes brought the event to life.  Everyone drew three emoticons that described their personality and turned their sheet into a paper airplane.  We exchanged paper airplanes by having a paper airplane war, and I made some good contacts.  Thanks to that exercise, I met a computer programmer who was hoping to work for valve and a passionate game artist.  After exchanging business cards, I made my way to the exhibition hall to play some indie games.

Despite the long lines for the games, I was uplifted since I knew today was the chance to meet Randy Greenback, the executive producer of Friday The 13th The Game.  I recalled several of his tweets advertising a game of his called Battle Sloths, so I decided to check it out.

I went to the Battle Sloths booth and what I thought would be a quick 15-minute visit, turned into a 1-hour play session and free talk with the developers of the game.  I even got to meet Randy Greenback and talk to him about Battle Sloths and Friday the 13th.  He’s a great person who loves making all kinds of games and trying new things.  For those who don’t know, Battle Sloths is a simple game where players play as sloths and compete in classic game modes such as king of the hill, death match, and capture the flag (or in this case, pizza).  Oh, and did I mention the sloths have these epic hats?!?!?  The booth was so much fun that I even returned for a second time to participate in a raffle.  I was one of three selected and won a new Corsair Mouse Mat.

After an exhausting afternoon of gaming and networking, I grabbed myself a pizza and claimed my spot in line for the Friday The 13th: The Game panel.  The 1-hour wait in line was worth it.  I got to sit in the second row and ask some questions during the panel. (story continues below)

(You can see my recording of it here).

The best part was getting to meet and chatting with co-creator Ronnie Hobbs, Randy Greenback, and the community manager Ben Strauss.  I hope to one day reach their level of success and position in the industry, so I was able to say that I had a fulfilling day thanks to that panel. 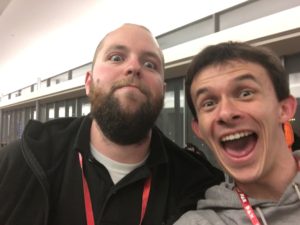 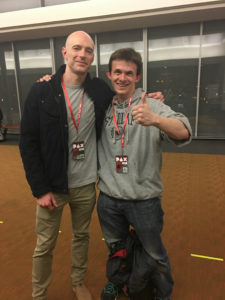 I slept like a log that night, but I knew I could organize my time better for Sunday’s panel .  With that in mind, I began to plan for Sunday’s PAX.