Friday The 13th: The Game – Choosing Your Counselor and Stats Charts 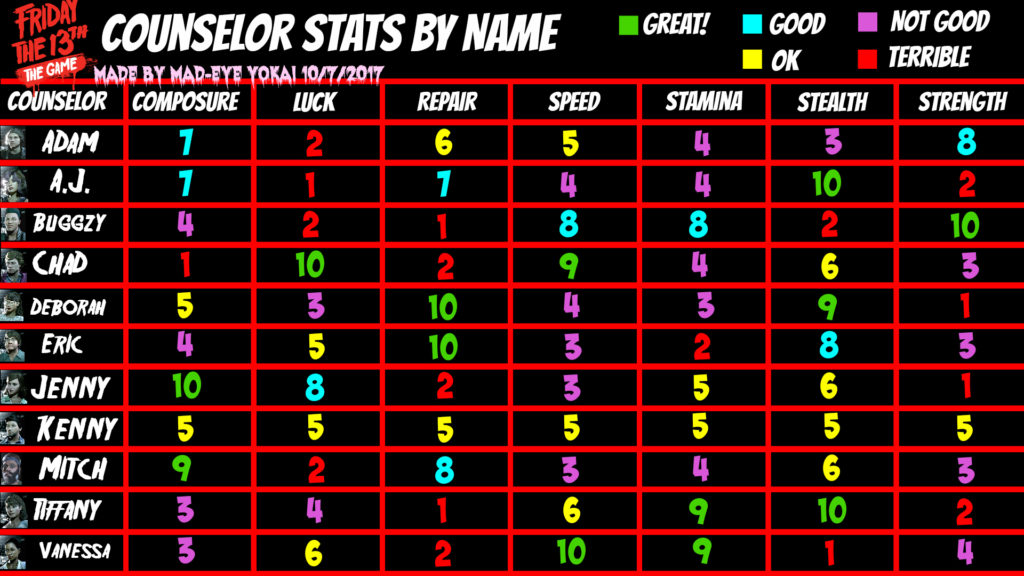 Below are some stat charts I made for those who want to compare stats directly between specific counselors.  Scroll down for individual breakdowns of each character.  There are 10 counselors to choose from, but you have to unlock most over time by playing the game.

The stats and their meaning:

Composure:  Is more of a tolerance level indicating how much your character can take before they freak out and panic.  Having a high composure reduces the rate that fear increases.  Fear fluctuates throughout a match and when your composure is gone, your fear levels are through the roof and you lose sight of your mini-map display and the screen looks something out of a 1930s horror movie.

Luck:  Increases your weapon durability and minor increases to many other stats.  These other stats include:

Stamina: Increases the overall stamina pool and cost of actions.

#Note on stamina and speed:  The greater your stamina rating, the longer it takes for a counselor to recover their stamina pool.  Whereas a character with a low stamina pool may have a smaller amount of stamina, but will be able to regenerate faster (so think of them as short distance runners).

Stealth:  Reduces the amount of noise generated and Jason’s ability to see.